Use of tap water guarantees quality

We have been keeping an eye on our water consumption for years, and have implemented some radical measures in this respect. This means that there are no longer any spectacular savings that we can achieve. To guarantee quality, we only use tap water in the plants during production of our snacks and also when cleaning crates and the plants themselves. In this way, we can rest assured that no contamination of the products occurs.

Van Geloven uses the most water when manufacturing our snacks. For example, we use water in the stock that Van Geloven uses to create a delectable ragout for our croquettes, and we also use water in our cooking processes. In principle, water consumption in this respect is related to the volume and mixture of the products we manufacture, but the temperature of the bains-marie also plays a role with respect to the cooking process. If the water used during pasteurisation needs to be at a higher temperature, this means that more water will evaporate which in turn means that more water has to be added to top up.

At our plant in Helmond, we now wash more crates than in the past, which has an impact on water consumption. On the other hand, the cleaning frequency has been reduced at this location and the cleaning method has changed. As a result, the overall water consumption at Helmond has decreased, also leading to less waste water, reducing pollution equivalents by 7%.

Since 2015, we have seen an increase in water consumption in Maastricht: that year, a new production line for fried noodle snacks was started which uses more water than is required for many other types of snacks.

Although all the measures for spectacular water saving have already been implemented in the past years, we still see possibilities to make a difference with respect to general cleaning activities. Working on this is one of the 4WIN team’s priorities. In the meantime, our staff perform cleaning work by making the very best efforts: achieving the desired level of cleanliness with as little water as possible. Most of our plants have also succeeded in carrying out cleaning and disinfecting work in one single step. In 2016, progress was also made by organising production planning better. That means that comparable products without allergens are planned after each other as much as possible. This involved adding a third shift per day, making it possible to continue production day and night and it was also possible to validate the cleaning frequency again.

Although the amount of water Van Geloven uses that ends up as waste water in the water purification process - particularly water used for cooking and cleaning - has increased in absolute terms since 2009, it has remained virtually the same in proportion to the production volume (<5% difference between 2009 and 2013). A new water purification system was installed at the Tilburg plant in 2014, which resulted in a decrease in the waste water pollution equivalents after installation. This system is also able to remove more sludge from the water, which can be transferred to the fermenter.The amount of waste water in 2015 was the same as in 2014. In 2016, the total figures are slightly higher. The reason for this is not yet known.
The waste water pollution equivalents as shown in the infographic were determined by calculations by the water boards. 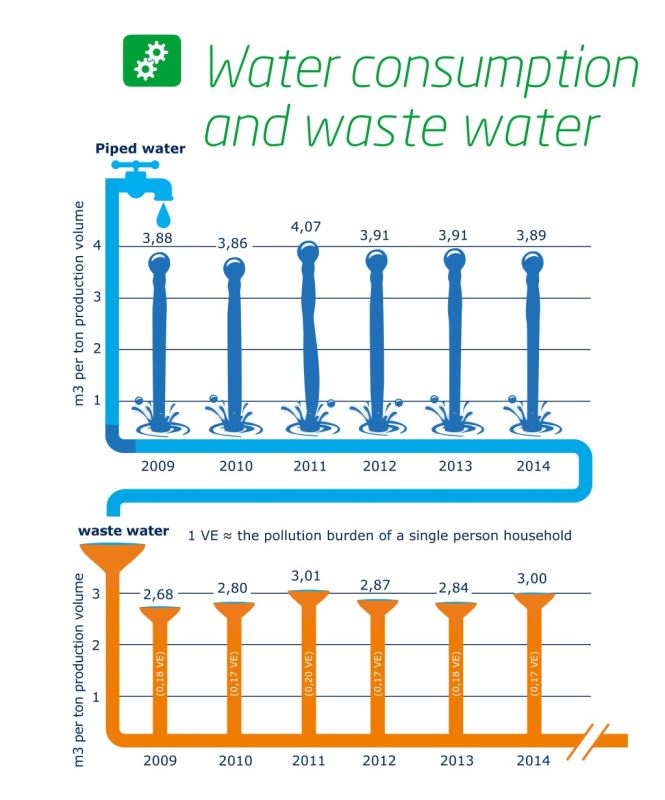